János Garay, a poet from Szekszárd created the poem „Szegszárd drinking song” in 1846. He coined the expression „bikavér / bull’s blood” in this piece for the very first time. It has served as the eponym for a red blend, which has received higher and higher ratings recently as opposed to its complicated past path; but has resuscitated like an Arabian bird. The Bull’s Blood can exclusively be created in Eger and Szekszárd; such a rule is in effect among wine-makers. Each year we celebrate the noble rivalry within the framework of the Bull’s Blood Duel. (You can read about this year’s duel in more detail here.) 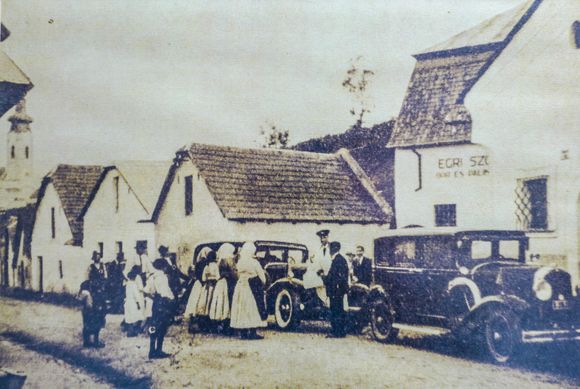 However, we usually do not say much about the person himself to whom we owe this blend. Jenőt Grőber, who was born in 1870 (in the picture above), is remembered and known as the father of the Eger Bull’s Blood: he was an excellent grape and wine producer in Eger, who was a pioneer in the irrigation of vineyards, strove for automation and thus, created the famous Grőber’s hand plow. He wrote down the “recipe” of the blend, the Bull’s Blood for the first time in 1912, and he modernized the production process based on the experiences in the south of France. He cultivated, harvested and handled the different varieties in separate vineyards, and in the end, he blended the wines which were stored separately, mainly the Kadarka, Kékfrankos, Oportó and Medoc Noir varietals.
The KNW is proud that Jenő Grőber did his significantly decisive work, which shaped the style, identity and image of the wine region, in the very same historical cellar street, the Verőszala, where these days we produce our wines, among them two Monopole Bull’s Bloods, the Rhapsodyt and the Superiort.

We asked our chief oenologist, Péter Szerdahelyi, to initiate us into the professional secrets of these two blends. We now know: we aged both of our Bull’s Bloods in our best, 225-litre, 40-40 % Hungarian and French, 20 % American barrique oak barrels. Kékfrankos, Pinot Noir, Syrah, Merlot and Cabernet Franc are the components of both red blends; however, while our 2015 Rhapsody has a rather fruitier and softer palate, our 2013 Superior is a true “Hard Core Bull’s Blood” category – as Péter likes to phrase it. This latter fact can be partly owed to the practice that these lots are aged in a larger proportion – approximately 35 % of them – in new barrels, and two barrels of the Grand Cru Kékfrankos of Nagy-Eged can be found in the blend as well; fitting up our long-lasting wines with a matchless mineral character. Our Superiors are closed by Portuguese “RCP Naturocork” corks, while our Rhapsody is supplied with carbon-free Normacork Select 300, which leaves zero ecological footprint, as it is made of a mixture of sugar cane and biopolymer.